These instructions assume you are using a Bash shell. You can easily get a Bash shell on Windows by installing the git client.

You need to install following in order to build MAGDA:

To push the images and run them on kubernetes, you’ll need to install:

You’ll also need a Kubernetes cluster - to develop locally this means installing either minikube or docker (MacOS only at this stage). Potentially you could also do this with native Kubernetes, or with a cloud cluster, but we haven’t tried it.

Trying it out locally

If you just want to try it out locally without actually changing anything, it’s much easier to just install minikube or docker for desktop, then following the instructions at https://github.com/magda-io/magda-config/blob/master/legacy.md. What follows is instructions on how to build everything, code, databases and all, from scratch into a working application.

Building and running (just) the frontend

If you just want to edit the UI, you don’t actually even need helm - just clone the repo, run yarn install at the root, then cd magda-web-client and run yarn run dev. This will build/run a local version of the client, connecting to the API at https://dev.magda.io/api. If you want to connect to a magda API hosted elsewhere you can modify the config.js file in the client.

Building and running the backend

First clone the magda directory and cd into it.

Then install npm dependencies and set up the links between components by running:

Once the above prerequisites are in place, and the npm dependencies are installed, building MAGDA is easy. From the MAGDA root directory, simply run the appropriate build command:

You can also run the same command in an individual component’s directory (i.e. magda-whatever/) to build just that component.

Helm is the package manager for Kubernetes - we use it to make it so that you can install all the various services you need for MAGDA at once. To install, follow the instructions at https://github.com/helm/helm#install.

In a nutshell, once you have helm installed, this is how you initialise helm and Tiller.

This gives you a local docker registry that you’ll upload your built images to so you can use them locally, without having to go via DockerHub or some other external registry.

Now you can build the docker containers locally - this might take quite a while so get a cup of tea.

Create the necessary secrets with the secret creation script

Windows only: Set up a volume for Postgres data

If you’re using Docker Desktop on Windows, you’ll need to set up a volume to store Postgres data because the standard strategy approach - a hostpath volume mapped to a Windows share - will result in file/directory permissions that are not to Postgres’s liking. Instead, we’ll set up a volume manually which is just a directory in the Docker Desktop VM’s virtual disk. We use the unusual path of /etc/kubernetes because it is one of the few mount points backed by an actual virtual disk.

Note: If using docker desktop for Windows older than version 19, change the value from “docker-desktop” to “docker-for-desktop” in nodeAffinity in file deploy/kubernetes/local-storage-volume.yaml

Install Magda on your minikube/docker-desktop cluster

If you’re using Docker Desktop on Windows, add -f deploy/helm/docker-desktop-windows.yml too, i.e. do this instead of the above:

This can take a while as it does a lot - downloading all the docker images, starting them up and running database migration jobs. You can see what’s happening by opening another tab and running kubectl get pods -w.

Also note that by default there won’t be any minions running, as some of them can be very CPU intensive. You can toggle them on by specifying --set tags.minion-<minionname>=true when you run helm upgrade.

By default, helm will create a one-time crawl job for data.gov.au to get you started. If you want to crawl other datasets, look at the config under connectors: in deploy/helm/minikube-dev.yml. For sources of data, check out deploy/helm/magda-dev.yml. Once you’ve changed your config, just run the helm upgrade command above again to make it happen.

If you want to just start up individual pods (e.g. just the combined database) you can do so by setting the all tag to false and the tag for the pod you want to true, e.g.

You can find all available tags in deploy/helm/magda/requirements.yaml

It’s a good idea to add an entry for minikube.data.gov.au to your hosts file (C:\Windows\System32\drivers\etc\hosts on Windows), mapping it to your Minikube IP address. Some services may assume this is in place. For example:

Running on both host and minikube

It’s also possible to run what you’re working on your host, and the services your dependent on in minikube. Depending on what you’re doing, this might be simple or complicated.

This is super-easy, just run

Now you can connect to the database in minikube as if it were running locally, while still taking advantage of all the automatic schema setup that the docker image does.

Running a microservice locally but still connecting through the gateway

You might find yourself developing an API locally that depends on authentication, which is easiest done by just logging in through the web interface and connecting through the gateway. You can actually make this work by telling the gateway to proxy your service to 192.168.99.1 in deploy/helm/magda/charts/gateway/templates/configmap.yaml. For instance, if I wanted to run the search api locally, I’d change configmap.yaml like so:

Now when I go to http://${minikube ip}/api/v0/search, it’ll be proxied to my local search rather than the one in minikube.

Be aware that if your local service has to connect to the database or other microservices in minikube you’ll have to use kube-port-forward to proxy from localhost:{port} to the appropriate service in minikube - you can find a list of ports at https://github.com/magda-io/magda/blob/master/doc/local-ports.md.

In the likely even you need to figure out what the jwt shared secret is on your minikube, you can cheat by opening up a shell to a container that has that secret and echoing the environment variable:

You can use the same pattern for minions - register a webhook with a url host of 192.168.99.1 and it’ll post webhooks to your local machine instead of within the minikube network. Be aware that your minion won’t be able to find the registry until you use kubectl port-forward to make it work… e.g.

What do I need to run?

Running individual components is easy enough, but how do we get a fully working system? It is rarely necessary to run all of MAGDA locally, but various components depend on other components as follows:

The following Architecture Diagram may help you to get clearer idea which components you need to run in order to look at a particular function area: 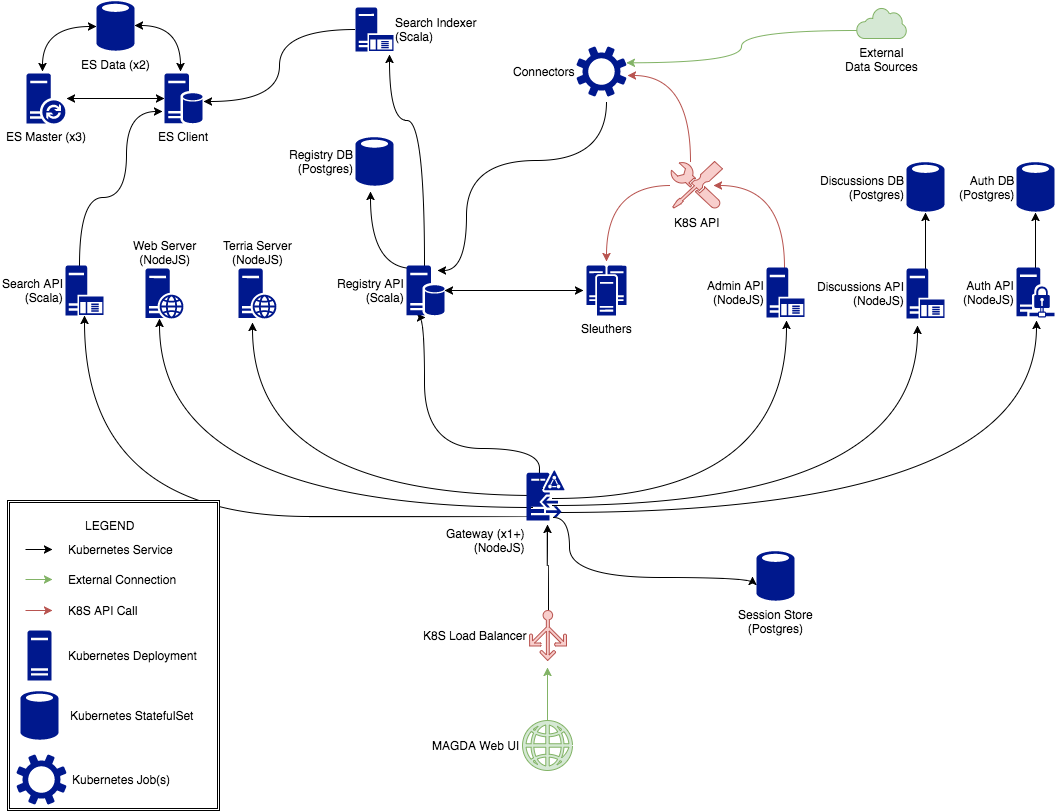 The following table shows the relationship between Magda components and Diagram elements:

Running on your host machine

You can also avoid minikube and run magda components on your local machine - this is much, much trickier. In any component (except databases/elasticsearch), you can run:

This will build and launch the component, and automatically stop, build, and restart it whenever source changes are detected. In some cases (e.g. code generation), it is necessary to run yarn run build at least once before yarn run dev will work. Typically it is not necessary to run yarn run build again in the course of development, though, unless you’re changing something other than source code.

A typical use case would be:

From root level of the project directory:

Like combined-db, elastic search can only be started in minikube via helm rather than yarn run dev.

You need to upgrade previously installed helm chart magda to include magda-elastic-search component:

And then, port forward elasticsearch so that you can run other components that may need to connect to elasticsearch outside the minikube:

Node.js / TypeScript components can easily be debugged using the Visual Studio Code debugger. Set up a launch configuration like this:

Scala components can easily be debugged using the IntelliJ debugger. Create a debug configuration for the App class of whatever component you’re debugging.